Home » General » Color contrasts and how to use them!

Color contrasts and how to use them!

Posted by: elixxier 30. October 2017 in General Leave a comment

Let’s start very easy:
Color contrasts are the differences between colors, which distinguish them from each other.

Contrasts help you generate tension in your images. You can emphasize specific areas or take away the attention from them. According to the theory of light, there are seven color contrasts in nature, which you can also use in photography.
Those are the ones that we are going to talk about now:

We assume this is the most well-known contrast. It describes the difference between the brightness of colors (i.e. red) and non-colors (i.e. black). The farther apart the values ​​are, the stronger the effect is. In photography it is often used to separate light and shadows from each other and to produce plasticity. It also enables the photographer to place a ranking to the objects in an image.
This contrast occurs when three different colors meet each other. The purer and stronger the colors are, the stronger the effect will be. It is most noticeable with a combination of red, green and blue.
This contrast is based on human perception. Our brain links certain attributes like hot and cold with specific colors. The effect is most clearly shown by the combination of blue / green (thereby perceived as very cold ) and red / orange (very warm). Other associations are:

If two colors lay on the opposite side of the color circle, they create a lot of visual tension for your eyes. When mixed together, the result would be a neutral gray. Side by side they reinforce each other and their luminosity can have an underlining effect.

We recreated these contrasts using a model in set.a.light 3D. That actually is a super easy trick to do: Take a model and use set.a.light to experiment with different lighting setups and colors and get to know all of the described contrasts to learn and later use them in your pictures ;) 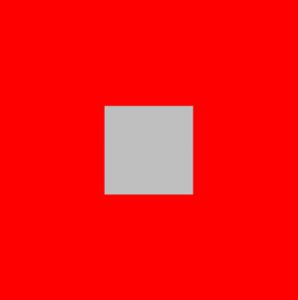 The easiest way to describe this contrast is the following example:
Imagine a red area, and place a small gray square in the middle of it. The square is now not going to look gray, furthermore it is going to appear slightly cyan. The reason of this phenomenon is that two complementary colors always produce a neutral gray and our brain tries to examine this harmony. If this harmony is not present, the brain is irritated and tries to restore the harmony where it assumes that it should be. The same principle also works for non-colors. Here the brain adjusts the brightness. Now bright areas on dark areas appear darker than they actually are, and vice versa.

This contrast is created by juxtapose saturated and murky colors. A color is murky when it is mixed with equal amounts of white and black. It is brighter and colder in mixture with pure white and is rapidly becoming a non-color when mixed with black.

This may sound negative, but helps to create an emphasis and accents, if you turn around the process: A not-too-bright color always seems stronger than it is in a gray or desaturated environment. Those who can remember the movie “Schindler’s List” will surely remember the red elements in this film.

The last contrast deals with the areal distribution of two different colors. If their brightness and their surface are nearly the same size they appear harmonious. But if you change one of the values, you will get a tension between the colors and the picture.
For example, you need a ratio of 2 : 1 if blue and orange should appear harmonious. That means you need twice as much of blue surface because orange is twice as strong as blue.

The best thing to do is to try out all of those contrasts in set.a.light 3D and you will see how much you can do and how easy you’ ll be able to take a huge influence on your pictures if you work with color contrasts :)