Home » General » Chapter 1: How to set up your camera manually

Chapter 1: How to set up your camera manually

In today’s online blog tutorial we’ll learn about the manual basic functions and settings of a modern reflex camera.

By adjusting the settings manually, we make sure that we’re able to work correctly in our photo studio. We can change the aperture, ISO and the exposure time.

Adding on to this, we’ll talk about the manual white balance. All of that sounds pretty difficult at first, but actually, it is very simple.

The aperture controls the amount of light that comes through our objective onto the sensor. It also has an influence on the focus depth (or deep focus). The aperture is counted in „f/numbers“, for example f 2.8.

With an aperture that is rather open (small number, i.e. f2.8) and constant light, more light gets onto our sensor, because the bigger opening lets more of it shine through. Our exposure time gets shorter by that (i.e. 1/250s). An open aperure gives the possibility to play around with blur(ring).

On the other hand, if the aperture is more closed with the same lighting (f11), there is less light that hits our sensor. We need a longer exposure time! Those factors, aperture and time, are proportinal. In our example we closed the aperture by 4 steps, which means that we have to choose an exposure time which is 4 times as long (1/15s). Remember: The area of blurring is getting bigger by that. Make sure to keep the camera as steady as possible or use a tripod to not blur the image too much. We only have our aperture to change the brightness of the picture in the studio, because this can’t be done via the lenght of exposure. Normally, you’d choose a rather small ISO sensitivity (i.e. ISO 100). We want to have as less (image) noise as possible, that’s why we don’t change the brightness this way.

Tip: You should look out for light-intense objectives with your purchase. We’re talking about objectives with the smallest apertures possible (i.e. f2.8), because they give more possibilities in creating your very own images.

With each step, there is half / double the amount of light that hits the sensor.

Most of the modern objectives (the aperutre is intergrated into it) bring the possibility to set the aperture in thirds.

The shutter speed is one of three possible manual settings that can change the lighting. It regulates the brightness (how long light is able to fall onto the sensor) and the speed, with which the photo is taken.

With fastly moving objects we want to use a short shutter “time”, to freeze the picture without motion blur. A longer shutter is prefered with bad light conditions (i.e. night vision), it needs more time to catch all of the lighting and atmosphere. A tripod is definetely recommended.

With each step, there is half / double the time to let light hit the sensor. Most reflex camera let you choose in half steps or thirds.

The exposure time plays a very submissive role in studio photography, because that is determined by the flash sync time.

Info: The fastest flash sync time in a studio is usually 1/250 sec. To prevent the shutter of the camera from covering parts of the image, a setting of  1/160 is ideal.

ISO, also known as ASA, is the level of sensitivity with filme or sensor. The number that comes with the ISO is the third option besides aperture and shutter speed to gain an influence on the brightness of the picture. The bigger the number is, the more sensitive. With lots of sunhsine, we’d usually use it at about ISO 100. By having double the amount of ISO (every step in the ISO “line”) we can gain one level of aperture. This makes it possible to photograph in a dark atmosphere without a tripod. But there has to ba a disadvantage, hasn’t it? Sure. This simply creates image noise. The technical improvement is very high today, so you’re normally able to shoot with higher ISO numbers, but images noise has a different impact from one camera to another, it just depends on your equipment.

Tip: Test your reflex camera with an exposure latitude with different amounts of ISO. Thsi allows you to see, at which point the image noise starts and how distracting it is. You might want to use a tripod or flash with this.

Within the white balance, our camera measures the color temperature of the light and evaluates the results. It tries to choose the right settings, which make a white surface also appear completely white. We do need that, because every type of light source emits a different color temperature. This is connected to the different wave lenghts of the spectral range / area. If there is a big part of emission with long wave lenghts, the light appears to be redish, shorter ones mean blue light. Our human perception does the process of white balance automatically, because we know, that a white sheet of paper in reality is white as well. This also means, that if blue light hits a white sheet of paper, we’re still going to see the paper’s color as white.

Cameras measure the color temperature just before the actual shot is taken and adjusts its settings. But at that point, our flashes in our studio might have not even “ignited”, which leads to a sort of misinterpretation by the camera (which just measures our studio lighting, but not the flashes). This leads to disappointing images with color cast in them.

With that said: We need a manual white balance!

You’d usually use a grey card / gray card for manual white balance. Position it, where the model would actually stand or sit later and take a photo with flash of the card. It’s important that the picture isn’t overexposedor underexposed, because the camera won’t be able to determine the right “value” of the card. You should now be able to set this picture as a reference for white balancing in the settings of your camera (you might want to read your manual for that). It analyzes the picture and sets the right kelvin-value for this situatiun.

Most of the cameras also have the option to set the amount of kelvin manually – you should only do that when a manual white balance isn’t possible at the moment. Most flashes are around 5500 kelvin, so that would be a good value to start with.

It’s important to know the connections of  aperture, shutter and ISO in order to be able to work professionally in the studio. Of course, this knowledge is important for outdoor-photography as well. The aperture might be the most important of those, because it doesn’t only define the amounts of light, but also the focus / deep focus.

A common setting for your camera could be:
Aperture 8, shutter1/160s, ISO 100 and a manual white balance.
You can now regulate your flashes depending on this settings and then you’re ready to go!

Chapter 2 will talk about the “first steps in portrait photography”.

Small guide for you: 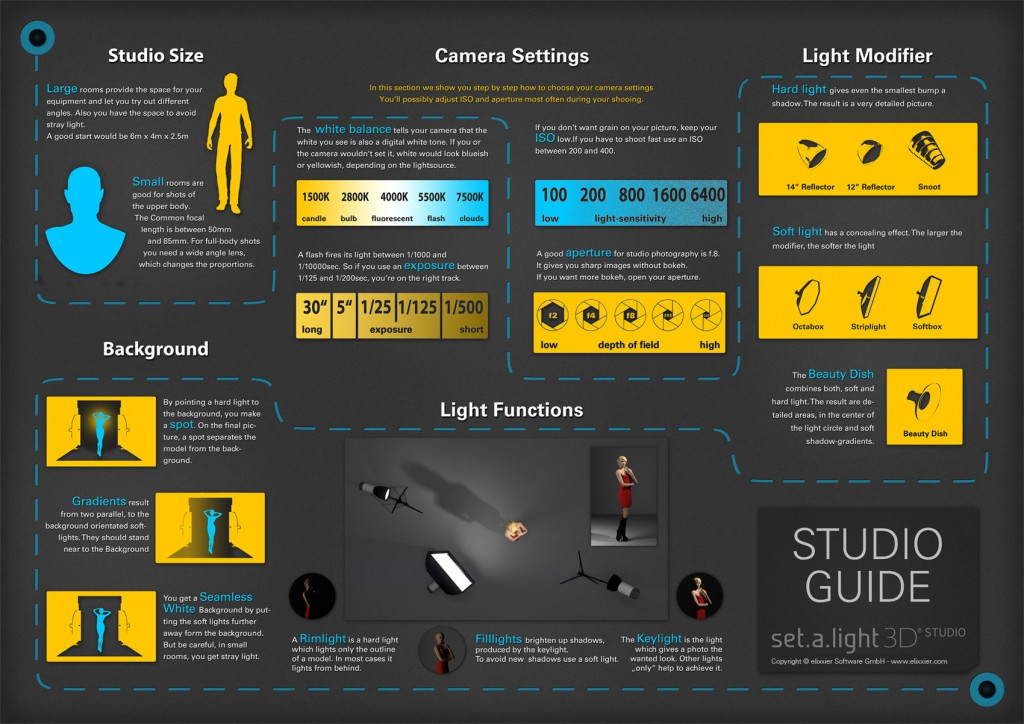